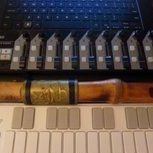 Pop and Crackle with new ASIO interface, latency apparently not the problem?

Recently bought a TASCAM US-HD 4x4, and using the custom ASIO drivers it comes with, it can't record or play back without pops/crackles/dropouts.  I've read all the other threads about optimizing latency and system settings to reduce this, nothing works.

For years I've used a TASCAM US-122; it's too old to support ASIO but it ran well with ASIO4ALL.  I could record on its L and R inputs flawlessly, and I had no trouble with playback even with 20+ tracks of multiple VSTi synths.

But, I wanted to record on three channels at once (vocals + stereo hardware synth), so I 'upgraded' to the US-HD 4x4, which has its own custom ASIO driver.  I keep hearing that a good interface with a custom ASIO driver is the best solution... but in this case, even with just a single, mono audio track, the playback through the US-HD4x4 has lots of little pops and crackles.  And while the system recognizes all four inputs, I can't record on even one at a time without the same pops and crackles ending up in the recording.

I have tried all the usual performance-optimization things that get suggested: tried a variety of buffer sizes in the 4x4's custom panel, from 128 to 2048 (the largest possible setting).  I did all the Windows system performance optimization stuff in the system control panel ("Visual Effects" and so on).  Turned off WLAN and Bluetooth.  Basically, everything in the TASCAM manual's "troubleshooting" page AND everything I could find in other threads on the Cakewalk support forums.  None of this helps; it's still unable to handle even a single mono audio track without crackle.

I honestly don't think system resources are the issue.  I have a Win10 64-bit Dell, with a 3.40GHz i7 and 16GB RAM, with about 120GB free on the main SDD.  The CPU usage monitor in Cakewalk never gets above 28% (in my single mono audio track tests).

Instead of system resources, I feel like there must be something to configure that I haven't configured properly.  I'm at my wit's end trying to figure out what I missed, though.

Some other things I tried:

If I restart the system and go back to the older US-122 and ASIO4ALL it runs well again (so, it's not the mic or mic cable!), but of course I'd be limited to two channels again.

I'm using the USB cable that came with it (type A on the computer end, type C on the TASCAM end), and I made sure it's in one of the "SS" USB 3.0 slots.  The AC power for the TASCAM is also plugged in.

The TASCAM ships with a download code for Cubase LE, so I tried that, just to make sure Cakewalk wasn't the problem.  Nope, same popping/crackling issues in Cubase, on both record and playback.

If anyone has any further suggestions, that'd be great.  Otherwise, I guess I give up and return it.  Is my computer (stats listed above) really not good enough to run an audio interface with a dedicated ASIO driver?  Maybe I'll have to go the route of a 4-channel mixer into a single stereo audio-in.  Shame not to have the tracks separate in the DAW though.

Thanks in advance. I'm hoping there's some obvious thing to try that I just didn't think of.  Let me know if there's any additional info that would be useful to provide.

35 answers to this question