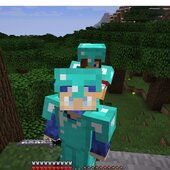 How do I turn up output volume?

Hello, I have an AT2020 USB mic and when I plug it in while using Cakewalk, the little volume bar goes up and down when I record but then when I play it back, I can't hear the recording. I thought it might be something to do with the output sound, so I'm just wondering how I can fix it?  How do I turn up the output volume?  Also, I have a bad laptop (e.g. it only has 120GB on SSD), so it may be that (it's very frustrating, I just wish Macbooks weren't so expensive so I could afford one with Christmas/birthday/pocket money). I just really want to make music. Please help me if you can by answering my question, I would appreciate it