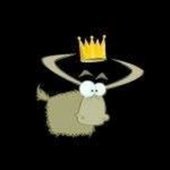 I Think My Old PC Knows It's Being Replaced

By Royal Yaksman, September 14 in The Coffee House v2.0