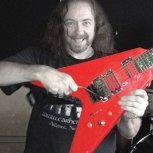 Multiple take lanes stuck in solo on the same track

Hey everyone, got a strange glitch happening on one track in a project. When I opened the take lanes on a particular track, two of them showed as having the solo button on.  So there is the first thing - in theory you can only have one take lane in solo mode at a time. Second thing - normally you click on the solo button to turn solo off if it is on. Not happening.

None of the other tracks on this tune are doing this; they're all behaving normally. There are only 4 tracks in this project, no plugins on any of them, and a just single bus with reverb , so it's not like there is a ton of crap tying up resources.  No other project is doing this. I have a copy of this project from a backup drive that does not have the last few days of work on it, and it does not have this glitch.   I guess I'm going to try to copy the new work from the glitchy version into the older one, but I would like to know what caused this (if possible) and how to fix it for future reference.

Thanks in advance for any thoughts.

Update: I closed everything down, shut off the computer, and took a nap. (The nap may be the most important factor.) I opened the project in safe mode, and a plugin I do not recognize was listed during start up. I think it was called LRS Groove player. I did not allow it to load. Not sure if it was the issue, but now everything seems normal. I'm going to save the project, and try to open it normally, and will post the results.