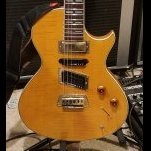 I was trying to make a backing track so that my son could practice "Iron Man" to just the bass and drum track.  I found a couple of midi files that sounded promising, but each had some parts that were right and some that were wrong.  So I thought I would try and stitch together the parts I like.

At this point, I have a midi file which is mostly right, but I like the drums better on another one.  The problem is that one file is at 76 BPM, where the other is a half time 152 BPM.  Is there a way to process a clip so that the timing of the notes is halved or doubled?